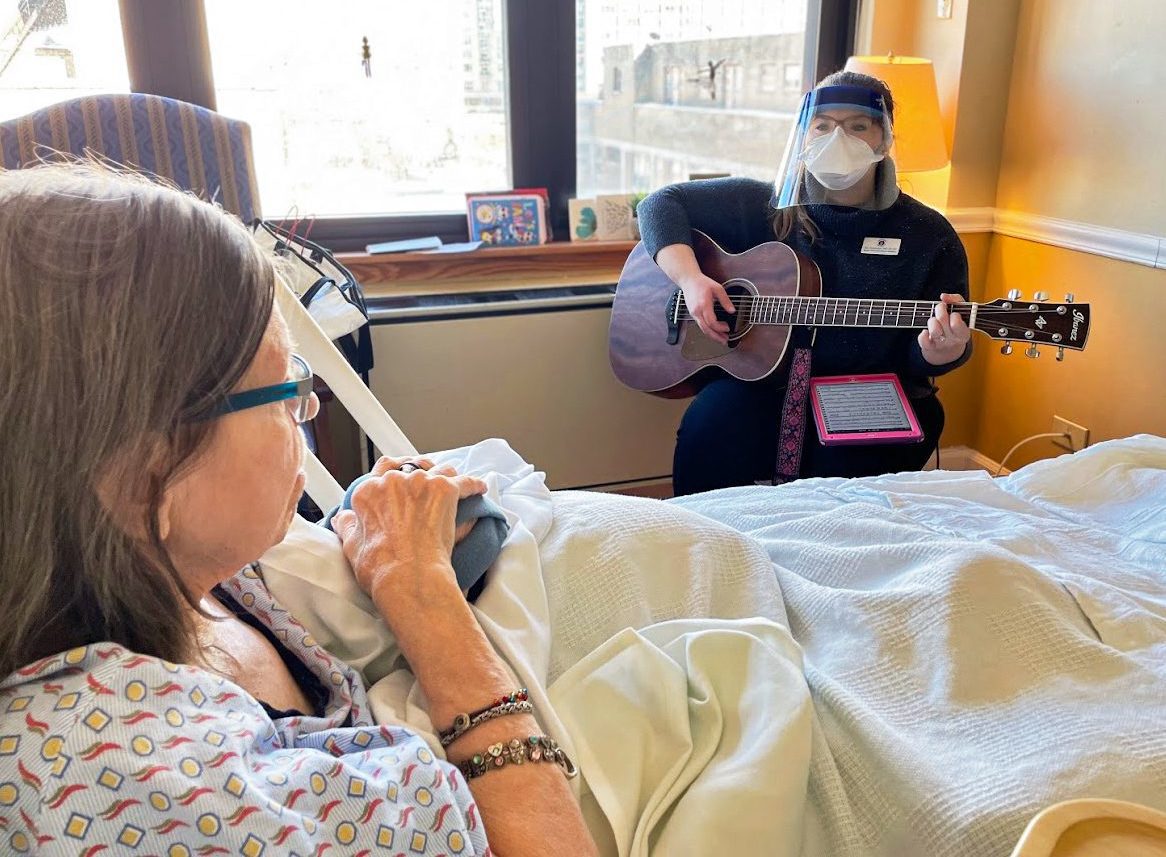 The Science of Music Therapy and Memory 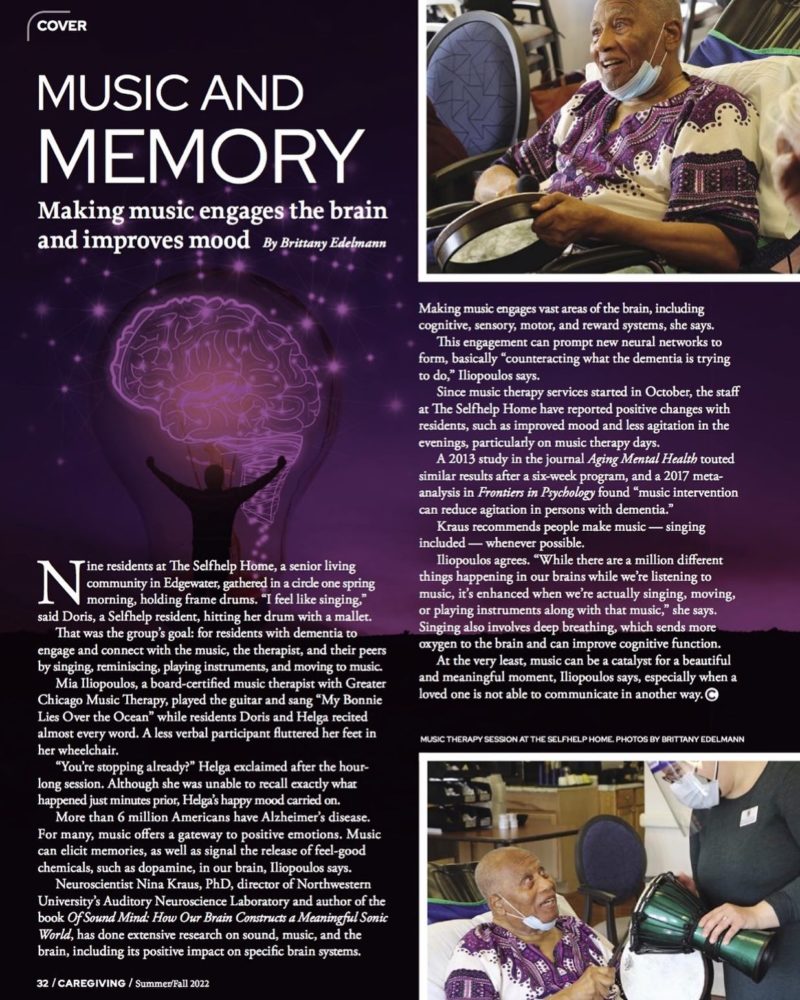 Nine residents at The Selfhelp Home, a senior living community in Edgewater, gathered in a circle one spring morning, holding frame drums. “I feel like singing,” said Doris, a Selfhelp resident, hitting her drum with a mallet.

That was the group’s goal: for residents with dementia to engage and connect with the music, the therapist, and their peers by singing, reminiscing, playing instruments, and moving to music.

Mia Iliopoulos, a board-certified music therapist with Greater Chicago Music Therapy, played the guitar and sang “My Bonnie Lies Over the Ocean” while residents Doris and Helga recited almost every word. A less verbal participant fluttered her feet in her wheelchair.

“You’re stopping already?” Helga exclaimed after the hour-long session. Although she was unable to recall exactly what happened just minutes prior, Helga’s happy mood carried on.

More than 6 million Americans have Alzheimer’s disease. For many, music offers a gateway to positive emotions. Music can elicit memories, as well as signal the release of feel-good chemicals, such as dopamine, in our brain, Iliopoulos says.

Neuroscientist Nina Kraus, PhD, director of Northwestern University’s Auditory Neuroscience Laboratory and author of the book Of Sound Mind: How Our Brain Constructs a Meaningful Sonic World, has done extensive research on sound, music, and the brain, including its positive impact on specific brain systems.

This engagement can prompt new neural networks to form, basically “counteracting what the dementia is trying to do,” Iliopoulos says.

Since music therapy services started in October of last year, the staff at The Selfhelp Home have reported positive changes with residents, such as improved mood and less agitation in the evenings, particularly on music therapy days.

A 2013 study in the journal Aging Mental Health touted similar results after a six-week program, and a 2017 meta- analysis in Frontiers in Psychology found “music intervention can reduce agitation in persons with dementia.”

Kraus recommends people make music — singing included — whenever possible. Iliopoulos agrees. “While there are a million different things happening in our brains while we’re listening to music, it’s enhanced when we’re actually singing, moving, or playing instruments along with that music,” she says. Singing also involves deep breathing, which sends more oxygen to the brain and can improve cognitive function.

At the very least, music can be a catalyst for a beautiful and meaningful moment, Iliopoulos says, especially when a loved one is not able to communicate in another way.

Learn More About Music Therapy at The Selfhelp Home: The Friedmann/Tuber Program for Cognitive Therapies

This new, unique program is being funded under the Friedmann/Tuber Program for Cognitive Therapies and was founded by a generous donation of this two-year grant from Phil Friedmann, honoring Craig and Kay Tuber for their continual aid and support of The Selfhelp Home. The grant also supports an enhanced dementia training for staff, that is also being developed.

In October 2021, Selfhelp contracted with Rebecca Frieman, and Mia Iliopoulous, to provide a multidimensional 2-year program for residents of The Selfhelp Home suffering from memory loss at various stages. Both are masters level board certified music therapists from Greater Chicago Music Therapy Inc. and have strong backgrounds in using music therapy to help older adults across the continuum of care and understand their unique challenges. The Greater Chicago Music Therapy’s goal is to bring exceptional, strengths-based, creative music therapy services to The Selfhelp Home community.

Our Music Therapy Program includes weekly individual and group sessions with an initial focus dedicated to those dealing with cognitive impairments. Read our blog to learn more. 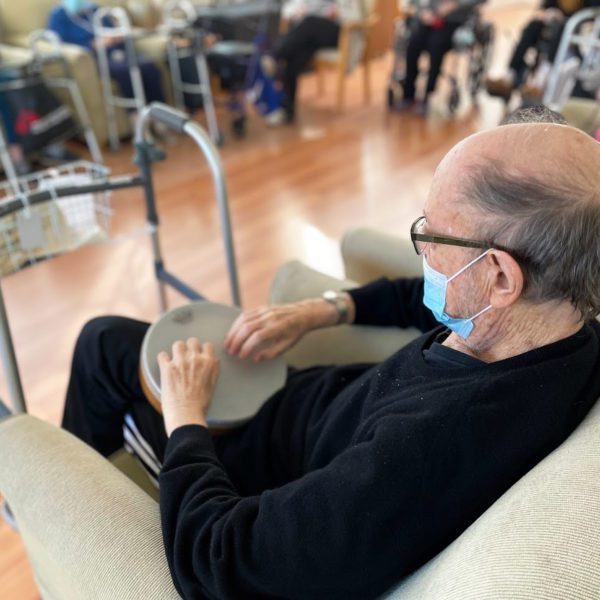 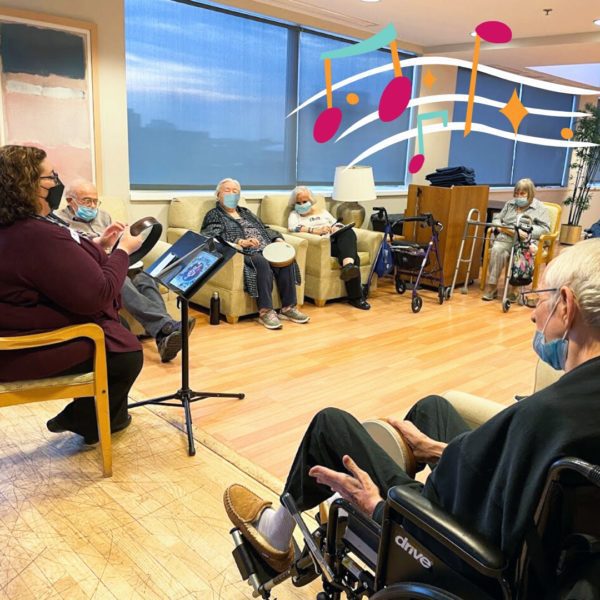 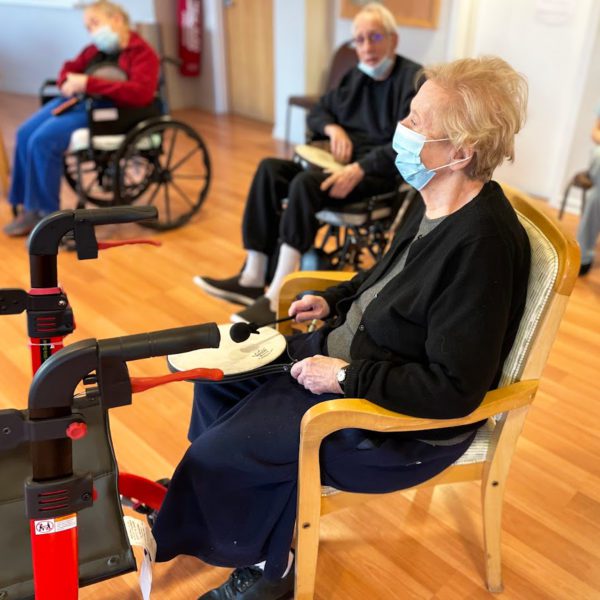 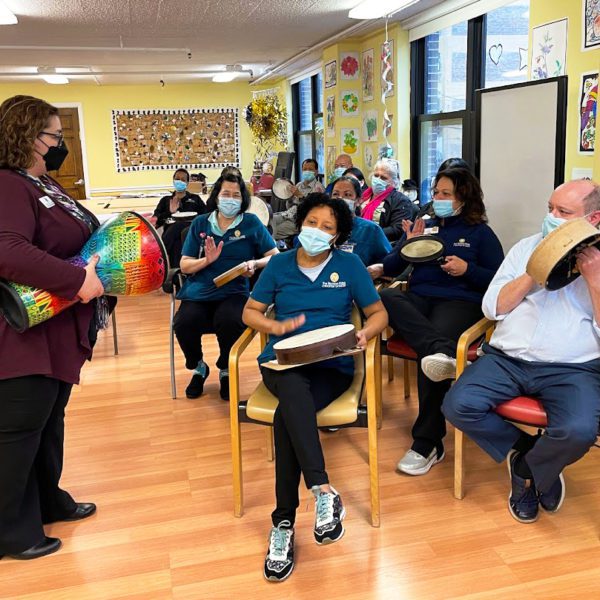